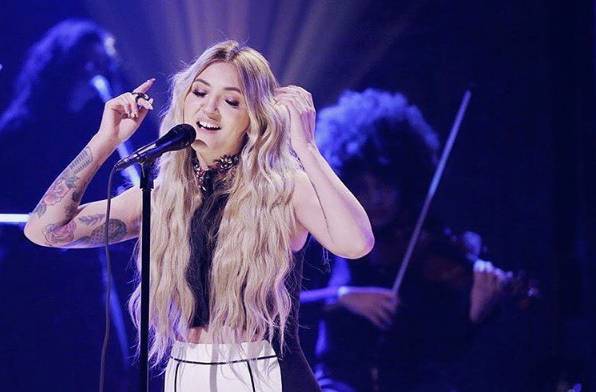 If you don’t already know the name Julia Michaels, you have definitely heard her work before. Michaels is the talent behind some of the biggest pop hits of the past five years, including Justin Bieber’s “Sorry,” Selena Gomez’s “Bad Liar” and “Good For You,” Fifth Harmony’s “Miss Movin’ On” and “All In My Head (Flex),” Britney Spears’ “Slumber Party,” Linkin Park and Kiiara’s “Heavy” and dozens of others. With a resume like that, who needs anything more?

Michaels needs a lot more, as she’s also now pushing to become a global pop star in her own right, and so far, things have gone pretty great. Her debut single “Issues” peaked at No. 11 on the Hot 100 last year, and she earned a pair of nominations at the 2018 Grammys, for both Best New Artist and Song of the Year.

Now, Michaels is gearing up to release new music and potentially give her fans the full-length they’ve been waiting for. I spoke with the singer-songwriter recently about how she first broke into pop, what she’s most proud of, and how she’s able to craft songs the world can’t get enough of.

CEEK VR: You started as a songwriter. You've written for... I could name a hundred names right now and we'd know all of them. What is your process for deciding what songs go to different artists and what you're going to keep for yourself? How do you go about that?
Julia Michaels: I think it's just sort of a feeling. I can't really describe it. It's sort of when the lyric and the sonics and everything just feels right. That's when I keep it for myself.

CEEK VR: Have you ever been in a songwriting session for an artist or for an album and come up with something and decided it works better for you?
Michaels: Not with an artist. I would never do something like that. That's not something that I would think was respectable, but I've definitely been in a camp or two where I've written a song and I loved it a little bit more than I thought I would.

CEEK VR: Is there a particular song you wrote that still stands out to you today that you are particularly proud of?
Michaels: I'm pretty proud of all of them. They're all my babies. I've put just as much of myself into my songs as I do any song that I've written with somebody else or for somebody else. They're all special to me.

CEEK VR: Like I said, you've written for some of the biggest names in the business, but is there somebody left that you would still love to have sing something you wrote?
Michaels: I don't know if there's someone left that I want to have sing a song I've written. I'd love to collaborate with someone, I think. I'd really like to work with The Weeknd. I think he's really dope.

CEEK VR: You guys would do something crazy.
Michaels: Yeah!

CEEK VR: You've scored a lot of big hits as a songwriter, but is there one that you wrote that didn't take off and become the hit you thought it was going?
Michaels: Every song is different. Sometimes songs you think are going to be really special aren't. Sometimes you just never know. Music is crazy and it's weird. You just never know.

CEEK VR: Now, as a songwriter or as an artist, do you concern yourself with chart numbers and sales and things like that? Are you worried about that?
Michaels: No. I'm not worried about that stuff. I just want to make music that my fans love. That’s all that matters to me.

CEEK VR: Tell me a bit about your first big break in songwriting. How did you first get into a camp? What was your first big single? How did you get there?
Michaels: Well, the first thing that I ever did was a theme song for a Disney Channel show called Austin & Ally. I had been writing with a songwriter. We had been pitching a couple things to someone that worked in the music department at Disney. We had been asked if we would try for the theme song, and we did it. Then two weeks later we found out we had it. I was actually in... I used to go to a charter school. I was in math and it was the last subject I needed to pass. I got the call when I was in my math class. I remember just freaking out. It was pretty cool.

CEEK VR: Amazing. That's got to be fun in the moment.
Michaels: Yeah!

CEEK VR You've been so successful as a songwriter, but do you ever face any pressures from other writers or artists or label people about genre or incorporating other features or anything? Do you ever find that pressure to bend to those trends at all?
Michaels: No. I just do whatever I feel. Whether it leans slightly more one way than the other, that's just sort of how I feel in the moment. I just want to explore those different songs and those different genres and make things feel special and interesting.

CEEK VR: Is there somebody rising now, like a new musician, whose songwriting has really caught you and interested you lately?
Michaels: Honestly I listen to so much older music that I couldn't really tell you.

CEEK VR: Who's your ultimate favorite songwriter of all time?
Michaels: Fiona Apple.